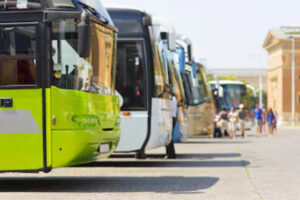 We see buses every day in New Jersey. They can especially be found in city areas and on highways. We often take these buses for granted, but the truth is that they carry the same risks as other vehicles. They can also get into fatal bus crashes.

Sadly, this was recently the case in Newark. A wrong-way crash involving a passenger vehicle and a transit bus killed one person and injured eight others. The fatal accident occurred on the morning of August 17 on Hawthorne Avenue, in front of Hawthorne Avenue School.

The bus was traveling from Irvington to Bloomfield. A car turned onto Hawthorne Avenue and was traveling in the wrong direction when it collided head-on with the transit bus. The driver of the car, a 33-year-old woman, died at the accident scene. The bus driver and seven passengers were injured. The driver and four passengers were taken to a local hospital to be treated for their injuries. The other three injured people were treated at the accident scene. The crash is under investigation.

Bus accidents can happen in many ways. Here are the most common causes:

Bus crashes are not common, but when they do occur, they can cause serious injuries and even death. Fortunately, victims can receive compensation for their injuries and other damages.

The Morristown bus accident lawyers at The Law Offices of Michael P. Burakoff can assist you with your bus accident case. Because buses are owned by other entities, the process can be complex. Schedule a free consultation to see how we can help. Call (973) 455-1567 or fill out the online form.