Motorcyclist Killed After Colliding With Deer 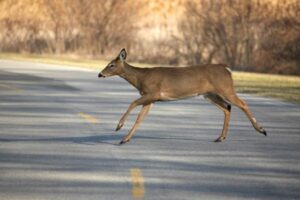 Many of us think of deer as cute and cuddly, but when these creatures are on the roadways, they can cause dangerous collisions. This was recently the case in New Jersey, when a man was involved in a motorcycle crash with a deer. The man died from his injuries.

The fatal accident occurred on the morning of November 1. A 58-year-old man was riding a motorcycle on eastbound Route 4, near Teaneck Road, when he hit a deer in the road. The impact caused the man to be ejected from his motorcycle.

The motorcycle was found on its side near a bus shelter. The rider, a River Vale man, died at the accident scene after hitting the four-point buck. The highway was closed for most of the morning, with traffic backed up to Paramus. The crash is under investigation.

What to Know About Deer Accidents

Accidents involving deer happen more often than you think. In fact, you have a 1 in 116 chance of colliding with a deer while on the roadway. More than 1 million accidents happen every year.

Most deer accidents happen in the fall, with November being the most dangerous month. Each year, approximately 10,000 people are injured and 200 people are killed in crashes involving deer. Motorcyclists face the highest risk; 70% of those killed in deer crashes are motorcyclists.

Deer can range in weight from 100 to 300 pounds, with male deer being the biggest. They are heavy animals, so you’ll want to avoid hitting them at all costs, no matter what type of vehicle you drive.

You can avoid hitting a deer by following these tips:

Nobody expects to encounter deer on the road, especially a busy highway. Hitting such a huge animal can cause damage to a vehicle as well as serious injuries and death.

If you or a loved one has been involved in a motorcycle crash, contact the Morristown motorcycle accident attorneys at The Law Offices of Michael P. Burakoff. We can assess your case and hold the at-fault parties liable for their actions. Schedule a free consultation today by calling (973) 455-1567 or filling out the online form.

By Michael P. Burakoff | Posted on January 13, 2022
« Were You Injured At Work During The Holidays?
Medical Malpractice Lawsuits Declining »