Who’s Liable for Your Scaffolding Accident Injury in New Jersey? 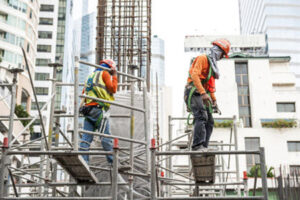 Compared to other places of work, construction sites are full of hazards that can injure workers and passers-by. A large percentage of construction site accidents in New Jersey involve scaffolding.

Scaffolding is a temporary structure design used by workers when building, repairing, or cleaning a building. Typically, scaffolding is not meant for long-term use and is made of wooden planks and metal poles. When a scaffolding structure is built negligently or improperly, construction accidents are bound to happen.

According to the Occupational Safety and Health Administration’s ranking of most frequently violated standards, the general requirements for safe scaffolding structures rank third.

Violating any of these OSHA scaffolding requirements could result in accidents involving the construction crew, pedestrians, and passers-by.

Who Can Be Held Liable for a Scaffolding Accident Injury?

A scaffold collapse can result in catastrophic injuries or fatalities. Most scaffolds are installed by a third party, not the construction company. Thus, when a scaffolding accident happens, the injured victims may hold the third party liable for their losses and damages.

Depending on who was injured in a scaffolding accident, a third-party or workers’ compensation claim can be filed. When a construction worker suffers a scaffolding accident injury, he or she may be eligible for workers’ comp benefits to cover the damages and losses, including lost wages, resulting from the accident. The worker may also be entitled to pursue a claim for damages against responsible third parties.

When a scaffolding collapse causes injury to passers-by, they may pursue a personal injury claim against the construction company and/or the third party that installed the structure. Talk to a Morristown construction accident attorney at The Law Offices of Michael P. Burakoff, P.A., to determine liability in your situation. Call at 973-455-1567 for a case evaluation.