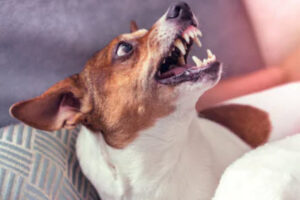 Dog bite cases can be punished harshly in some cases. In fact, some people can be charged with a crime when their dog bites others. This was the case in New Jersey, when a security guard allowed a dog to bite someone outside a restaurant. The security guard is now facing aggravated assault charges.

The incident happened on July 29 at Adelphia Restaurant in Deptford. The 33-year-old security guard was working at the restaurant when he got into an altercation with a 26-year-old man, allegedly over the man’s Boston Red Sox hat. When the man refused to remove the hat, the altercation spilled out into the restaurant’s parking lot.

In early August, the security guard was charged with aggravated assault for the dog bite incident. The victim, who is black, claimed that his race played a role in the attack. He said that sentencing was a good start, but declined further comment, as a possible lawsuit may be forthcoming.

The incident led to protests in front of Adelphia Restaurant. One person was arrested for disorderly conduct in one incident, but the protesters have vowed to show up every weekend to continue with the protests.

The NAACP has been informed about the incident and called the security guard’s actions “egregious and unnecessary.” They also called the man’s injuries “disconcerting.”

One thing is for sure: the security guard won’t be returning to the restaurant. Adelphia  terminated its contract with the security firm, which was from Virginia. Instead, they are using a new company that does not use canine protection.

What To Do After a Dog Bite

After a dog attack, you need to act quickly. Some wounds are major and need immediate medical treatment. If you wait too long, you could get an infection, suffer extreme blood loss, and even die.

Dog bites are known to tear the flesh and cause an open, jagged wound due to the placement of the dog’s teeth, which are various sizes. This creates a breeding ground for infection, which is the top concern after a dog attack. Even if you feel fine, you should seek medical help right away and get treated. It could be the difference between life and death.

Your next step should be to contact a lawyer. The owner of the dog should be held liable for your injuries. Your lawyer can help you understand your options for financial recovery.

Dog bite attacks can be gruesome. Such an attack can cause lifelong injuries, with many causing scarring and disfigurement.

If you have been injured in a dog attack, seek legal help from the Morristown dog bite injury lawyers at The Law Offices of Michael P. Burakoff. We can help you obtain compensation for your damages. Fill out the online form or call (973) 455-1567 to schedule a free consultation.