Father Sues Son For Slip And Fall, Gets $1.5 Million Settlement 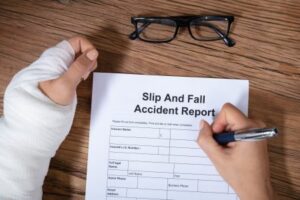 If you suffered injuries after slipping and falling at your adult child’s house, would you sue them? A New Jersey father did, and it worked out well for him, as he received a settlement of $1.5 million.

However, the most amazing part of this story is that the father’s accident was captured on video by his son’s security camera, and the father was at his son’s house to help build an enclosure for the camera. The footage was used as key evidence in the slip and fall case, which settled on May 3.

The case settled the day before it was scheduled to go to arbitration. The case started out in mediation, but could not be resolved by the parties involved. The son’s insurer, Chubb Insurance, covered the full $1.5 million settlement.

The incident happened on October 20, 2018. The father arrived at his son’s home in Short Hills. He brought a saw and other tools with him to help his son build an enclosure for a surveillance camera on the deck. The son led his father through the rear sliding glass door to the deck area. Next to the door was a worn-out mat with no slip-resistant backing. The father went out the door and stepped onto the mat. The mat slid out from under him, causing his right leg to slide out from under him. The father then fell onto his right leg. The entire incident was caught on the surveillance camera.

The accident led to serious injuries for the man. When he landed on his leg, it caused fractures to the fibula and distal tibia. Surgery was required to repair and heal the broken bones. The man then needed a second surgery after he developed an infection and had to have some screws removed.

Both sides had expert witnesses to present evidence for the case, but the case ended in favor of the father with a seven-figure settlement. The father, now 70 years old and retired, sometimes experiences pain and mobility issues, but had a good recovery and is fully mobile. He and his lawyer felt that the $1.5 million settlement was fair. Despite the legal drama, the father and son still speak to each other.

A slip and fall accident can lead to serious injuries, including mobility issues. Such a case can be challenging to fight, especially when the plaintiff and defendant are related to each other.

If you were injured in a slip and fall incident, make sure you receive full and fair compensation for your damages. Discuss your situation with the Morristown premises liability attorneys at the Law Offices of Michael P. Burakoff. We will help you understand your legal rights. Schedule a free consultation today. Call (973) 455-1567 or fill out the online form.