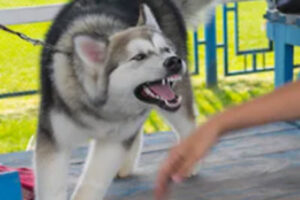 When you think of a dog attack, you may imagine a person getting bitten by a random dog they don’t know. This happens in a lot of cases, but in many instances, people are bitten by their own dogs in their households.

This is what recently happened in New Jersey. A dog bit two family members on the evening of October 3. The incident happened in Washington Township.

The dog, a cane corso, bit the two people while they were inside their home. The victim suffered unspecified wounds. They were treated for life-threatening injuries.

It is unknown what caused the dog to bite. The dog was taken into custody by animal control officers.

Cane corso means “bodyguard dog” in Latin. They are described as protective dogs that are confident and assertive and confident. These large dogs weigh more than 100 pounds and are known as loyal animals.

Why Do Dogs Turn on Their Owners?

Approximately 15% of dog owners have been bitten by their own dog. Once a dog has bitten once, they are more likely to bite again. Dogs that use aggression are rarely cured. It is often best for the dog to be put down if there is fear of the attack happening again. However, you may want to consider the severity of the bite and whether there was growling, snarling, or snapping involved. In complex cases, a board certified veterinary behaviorist can evaluate the dog and make an assessment.

So why do dogs attack their owners? One of the most common reasons is prey drive. Prey drive is common in hunting dogs, but most people these days aren’t hunters. This can lead to tragic outcomes. A dog breed with a high prey drive may chase and attack a small child.

Some dogs are also territorial. When they see unfamiliar people around the home, they may feel threatened. The dog may feel a need to protect their territory and this can lead to an attack.

Stress is another factor. Just like humans, dogs crave routine. They like familiarity. They feel stressed out when changes happen. Some things that can cause stress in dogs include guests, crowds in the home, thunder and other severe weather, and loud noises such as fireworks.

Pain can also lead to a dog bite. When dogs are in pain, their instincts tell them to keep everything away from the painful area. So when their owner touches the area in an attempt to stop the pain, the dog may lash out. Even something accidental such as stepping on your dog’s paw or tail can also cause them to snap at you.

Unfortunately, dogs do not always protect their owners. Sometimes they become aggressive for no apparent reason and viciously attack people, causing significant harm.

Have you been affected? If so, a Morristown dog bite injury attorney from The Law Offices of Michael P. Burakoff can help you with your case. For a free consultation, call (973) 455-1567 or fill out the online form.