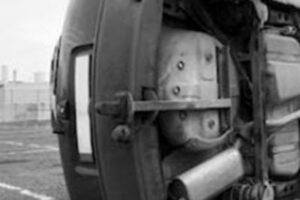 Car accidents are a common occurrence in New Jersey. In some areas, they happen every day. While many are minor and result in little damage, some are more serious, totaling the vehicle and causing significant injuries.

Some types of car accidents are more serious than others. One type of serious crash is called a rollover crash. As the name implies, this occurs when a vehicle tips or rolls over, landing on its side or roof.

In rollover crashes, the vehicle becomes unstable due to various forces. This could happen when the vehicle goes around a corner at a high rate of speed or swerves quickly to try to avoid a crash. It could also occur when the vehicle strikes an object, such as another vehicle, a guardrail or a curb. Soft shoulders and snow banks can also cause rollovers.

Some vehicles will also roll over when going downhill, such as falling down an embankment. This may happen when the vehicle goes off the road. It could also occur when an SUV is driving off-road on unfamiliar terrain. The vehicle may go down a steep slope and tumble down the hill, causing the SUV to roll over.

Rollover accidents can be complex, involving various factors. Here’s a look at some of them in more detail.

Speed is a common factor in rollover crashes. Of those that result in fatality, 40% involve high rates of speed. In addition, alcohol use is often involved in these accidents. Close to 50% of rollovers involve alcohol use.

Vehicle type is also a factor. Vehicles with a higher center of gravity – such as SUVs and vans – are more likely to roll over than sedans and smaller cars. Location also plays a role. Rollovers are more likely to occur in rural areas, since the roads are undivided. There is nothing to prevent them from colliding with another vehicle on a two-lane road. In fact, 75% of rollover crashes occur in country locales.

Driver behavior tends to play a role in rollover accidents. This is proven by the fact that 85% of rollover crashes involve just one vehicle. No other vehicles were involved, so the driver is most likely to blame. Also, most of these crashes involved routine driving maneuvers, such as going straight or around a curve. As such, the driver was likely distracted or involved in some other behavior at the time of the crash.

A rollover crash is often more serious than other types of car accidents. This is because the roof is likely to collapse and cause head injuries. A person who survives one of these crashes will likely have to suffer with catastrophic injuries.

If you have been a victim of a rollover crash, get help from a Morristown car accident lawyer at the Law Offices of Michael P. Burakoff. We will make sure you take the right steps to maximize your outcome.  Fill out the online form or call (973) 455-1567 to schedule a consultation.