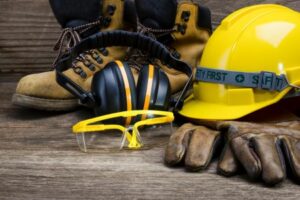 Construction sites are ripe with dangerous conditions. Heights, electricity, machinery, tools, large materials—all combined with a lack of safety training—make it easy for workers to suffer injuries and even fatalities in construction accidents while on a job site.

Sadly, this was recently the case for a New Jersey construction worker. The 24-year-old worker was killed after he fell off a roof while working on an Amazon warehouse. The fatal accident occurred on the afternoon of July 6 in Pennsylvania.

The Trenton man was working on the roof of the Amazon warehouse with his brother. They were 25 feet above the ground replacing roofing material. The man removed his safety ties as he was getting water. However, he failed to put the safety cable back on right away, which apparently happens quite often on construction sites, according to the victim’s brother.

As the man, his brother, and other workers were tearing apart the roof of the warehouse, the man went to move out of the way. He then stepped on a piece that was already cut, causing him to fall through the roof. He was not wearing his safety cable at the time.

Emergency medical services arrived and airlifted the worker to Penn Presbyterian Medical Center in Philadelphia. The man later died from his injuries.

B & C Construction has declined to comment on the accident. However, IMC Construction expressed their disappointment in the worker’s actions, stating that despite extensive safety training, inspections, procedures, and mandated safety requirements, the man removed the safety line from his safety harness and fell within minutes.

OSHA is investigating the incident. Amazon is not facing any criminal charges and is not under investigation, as the company is not involved in the construction. However, a spokesperson for Amazon has expressed their condolences over the man’s death. They said they will work with OSHA as needed to assist with the investigation.

OSHA is, however, investigating the primary roof contractor, A. Poletto & Associates. So far, there have been no violations cited by any of the construction companies. The agency has six months to complete an investigation.

Construction accidents are very common, with many causing serious injuries or even death. Even with safety training in place, unfortunately, fatal accidents like these still happen due to worker negligence.

If you or a loved one was seriously injured or killed in a construction accident, seek legal help from the Morristown construction accident lawyers at The Law Offices of Michael P. Burakoff. We can assess your case and assist you with physical and financial recovery. Call (973) 455-1567 or fill out the online form to schedule a free consultation.