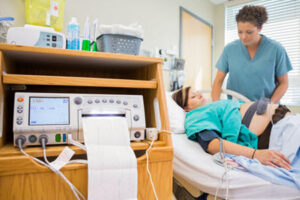 Babies are born every day in hospitals across the United States. Despite the fact the labor and delivery are so among women and America is a highly industrialized country, the childbirth process can still result in complications. The mother or baby can become seriously injured or even die during the process.

An emergency C-section for a woman who was in labor over the summer led to cardiac arrest. The woman then went into a coma and woke up with a brain injury. The incident happened in July and the woman is still recovering from the botched operation. The family’s lawyer suspects medical negligence and is considering a medical malpractice lawsuit.

The 28-year-old woman was going into labor at Hoboken University Medical Center on July 19. By the next day, she was 8 centimeters dilated, but doctors told her she needed an emergency C-section. They claimed that the baby was in distress and that the woman and her boyfriend could lose the baby if they did not have the surgery immediately. The doctors told her she’d be fine.

The woman was taken to the operating room and it is unknown what happened next. A nurse was running in the hallway screaming “Code blue.” Medical staff were rushing to the woman’s room. She was taken to the ICU and intubated. When the woman’s boyfriend asked what happened, nobody could tell him. She apparently stopped breathing while undergoing the C-section, but nobody can tell him why. The woman stopped breathing for nine minutes and most likely suffered a hypoxic brain injury due to the lack of oxygen.

In November, the woman was transferred to Kessler Institute for Rehabilitation, where she is undergoing physical therapy. That was when she met her baby for the first time. The woman is making some progress, although she is minimally conscious. She can move her arms and is trying to speak.

The woman’s boyfriend was planning to propose marriage and buy a home for their new family. Those plans will need to be on hold as the focus is on the woman’s recovery.

Hoboken University Medical Center has refused to turn over medical records related to the woman’s labor and delivery, despite a court order. Therefore, it is still unknown what happened during the nine minutes the woman was unconscious.

The woman’s boyfriend has been able to piece together most of the events that happened that day. The family’s lawyer may file a lawsuit against the hospital and the medical staff involved.

Medical negligence should not happen with a routine procedure such as childbirth. The women’s life may never be the same and the medical staff involved should be held liable for their actions.

If you or a loved one has experienced medical malpractice, seek legal help from a Morristown medical malpractice attorney at The Law Offices of Michael P. Burakoff. We can determine liability and assist you in obtaining the compensation you deserve. Schedule a free consultation today. Fill out the online form or call (973) 455-1567.