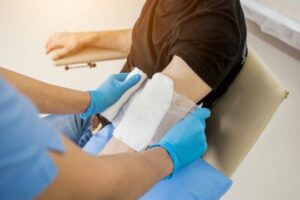 While many neighborhoods are peaceful, some are overrun by vicious dogs. In some cases, these dogs attack people multiple times. This can be frustrating to those who live in the area, especially if there are children or elderly people in the area. Both are vulnerable to dog bites, so what can be done?

A New Jersey man and his roommate’s puppy are recovering from a recent dog attack. Both were attacked on May 18 in a Cherry Hill neighborhood. The frustrating part is that this is the second time that the dog has attacked.

The attack happened when the man took the 4-month-old puppy, Cheddar, for a walk. The dog was on a leash and running out in a field. As they were walking back to the Windsor Mews housing development, a woman was pulling in with her pitbull mix in the back seat. The woman even rolled down her car window and warned, ”Watch out, I have a killer back here.”

The dog got out of the car and attacked both the man and the puppy. The man tried to pull up Cheddar by his leash and grab his collar, but the pit bull jumped and grabbed Cheddar’s hind leg. The dog swung both down to the street. The attack went on for about 15 minutes.

By then, a neighbor intervened and pepper sprayed the pitbull, which likely saved the puppy’s life. The man ran toward his house, but the pitbull kept chasing him and trying to attack some more. The man was able to put Cheddar inside his truck and the dog finally stopped the attack.

However, this wasn’t the first time the pitbull had attacked. The first attack was in 2020. The pitbull had pushed open its home’s screen door and attacked a smaller dog. When people tried to intervene, they got severely bitten. After that incident, the dog was ordered to be muzzled anytime it was outside. The owners, however, did not follow the rules and now the Windsor Mews HOA president wants the dog gone to prevent any more safety issues.

Cheddar’s front right leg is shattered and he also suffered several puncture wounds. It is likely that he’ll lose his leg. The owner is heartbroken.

According to Cherry Hill officials, the dog has been surrendered by the owner and they want it put down. A municipal court judge will make that decision. The pitbull owner is facing various charges after this second attack.

Dog attacks can cause injuries to people and other dogs. These injuries can be severe and require costly treatment.

Get full and fair compensation for all your damages by contacting a Morristown dog bite injury attorney from The Law Offices of Michael P. Burakoff. We understand the debilitating injuries that dog bites can cause. To schedule a free consultation, fill out the online form or call (973) 455-1567.