Although animal-attack claims most commonly involve dog bites, many other types of domesticated animals, such as cats, ferrets, rats, snakes, and even birds, can also bite humans. Even non-domesticated animals, such as large cats or monkeys and apes ordinarily found in the wild (owned by some people as pets or held in private animal refuges) have been known to attack children and adults. An animal owner’s liability for injuries caused by his or her pet, if any, will vary greatly from jurisdiction to jurisdiction. Our experienced Morristown animal bites attorney at the Law Offices of Michael P. Burakoff, P.A. is an excellent source for advice and information in animal attack case.

To succeed in most animal attack cases, the injured person must prove that the animal causing the injury was owned and kept by the defendant. In some jurisdictions, the injured person was also required to show that the owner knew or should have known that his or her animal was dangerous, mischievous, vicious or prone to such threatening behaviors. Under current laws in many areas, however, when it is proven that an owner was somehow negligent (such as by not properly restraining or containing the animal), the injured person can often recover damages without proving the animal’s viciousness.

An owner of an animal may be found liable under any circumstances in which he or she had knowledge of the animal’s viciousness but failed to act in order to prevent injuries to others. Accordingly, if an animal exhibits vicious or uncontrollable behavior, the owner should take steps to shield the public from the animal. For example, if an individual owns a dog that is known to attack and bite without provocation, the owner should probably keep the dog safely confined indoors and, while outside, in a yard from which it cannot escape and that others cannot easily enter. If an owner does not adhere to these common-sense guidelines and the animal attacks, he or she may be found liable for the resulting injuries. 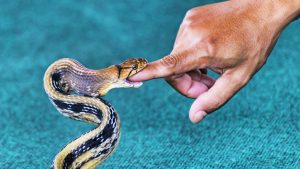 Those who keep animals generally considered wild, including lions, wolves, bears, alligators, crocodiles, and monkeys, are typically liable for injuries caused by such animals regardless of whether the particular animal is known to be dangerous. Because these animals are generally presumed to have a natural tendency to revert to their wild instincts no matter how well trained or domesticated, their owners are often held “strictly liable” for any injuries they may cause. However, strict liability might not apply if the animal injures someone while it is confined or restrained on its owner’s property, but this is a factually dependent argument that will not apply in every case.

In some states, it is not always necessary for the animal to actually bite or attack the victim to hold the owner liable for an injury. For example, a pedestrian who breaks his or her ankle in a frightened attempt to get away from a fenced-in dog’s snapping, barking, or other aggressive behavior, may nonetheless be able to sue the dog’s owner successfully if he or she can show that the actions of the dog led to the injury.

People who are injured in animal attacks are not always entitled to recover damages. If the injured person provoked the animal, for instance, recovery may be denied. Similarly, if a pet owner informs his or her neighbor that his or her pet parrot is not friendly and should not be touched, but the neighbor does not heed this warning, pokes the bird and is thereafter pecked or bitten, recovery may be denied. If the owner merely stated that the parrot was not always friendly, on the other hand, but still encouraged the neighbor to pet it, the owner could likely be liable.

People who are injured by an animal while on the owner’s property are generally unable to recover if they are trespassing at the time of the attack. In many states, in order to successfully bring suit under a dog bite statute, the injured person must show that he or she was lawfully in the place where the injury occurred. If the injured person was a trespasser at the time of the attack, the animal’s owner may not be liable for injuries caused by his or her animal. If, for example, someone jumps over a fence into an enclosed junkyard with “Beware of Dog” warnings posted and taunts a guard dog with a stick, the junkyard owner may not be liable if the dog then bites the trespasser.

Persons injured by biting or attacking animals should seek the counsel of a personal injury lawyer who can explain the complexities of their case and provide guidance through the legal system. If you or someone you know has suffered personal injuries as a result of an animal attack, an experienced and knowledgeable personal injury lawyer at Law Offices of Michael P. Burakoff, P.A. in Morristown, New Jersey, can advise you on whether you may have a claim against the animal’s owner and can help you pursue the maximum damages to which you are entitled. To schedule an initial consultation with one of our attorneys, please call 973-455-1567 or visit our website.