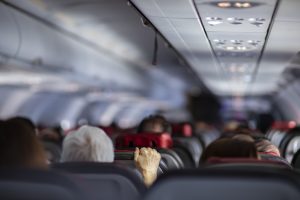 Although air travel is one of the safest forms to travel, passenger injuries or even death can occur. Injuries due to turbulence during a flight top number one in the list the most frequent air travel accidents causing soft tissue injury and broken bones as passenger attempt to protect themselves or are jostled about.

For those unexpected events is highly advisable to consult our Morristown airplane accident attorneys who will provide you with the proper information on how to proceed with your claim. Call the Law Offices of Michael P. Burakoff for a personal and initial consultation 973-455-1567.

The safety of passengers and employees is of paramount concern to both governmental entities and private airline companies. As a result of safety concerns, the Convention on International Aviation formed the International Civil Aviation Organization (ICAO) through the UN.  The ICAO was formed to establish rules concerning airspace, aircraft registration and, safety. The rules and regulations apply to all countries or states covered by ICAO and pertain to international travel.

Under the ICAO articles of operation, each state or county must be responsible for the safety and oversight of its aircraft and laws regarding aircraft within that state territory.  For example, every state has complete sovereignty of the airspace above its territory. The aircraft of those states can take flight within the state without prior permission but may need permission to make landings and inspections shall occur upon landing and prior to taking off.  The ICAO does not permit the United States to go to a foreign country and inspect its aircraft.  Instead, the Federal Aviation Association (FAA) of the United States regulates aircraft safety and inspections of any aircraft in or coming into the United States.

In the United States, the FAA is responsible for overseeing and setting standards for aircraft safety, noting that one of its functions is to “issue and enforce regulations and minimum standards covering manufacturing, operating, and maintaining aircraft.” While the FAA regulates civil aviation, it also develops aviation technology and operating systems. All aircraft must follow the standards set forth by the FAA in order to be operational.

Despite vast and strict rules and regulations in aviation, accidents occur, causing serious injuries and deaths.  Recently, In March of 2019, President Trump announced that FAA grounded the Boeing 737 Max after several planes crashes killed hundreds of people. The day prior to the announcement by Trump, a deadly Ethiopian Airlines flight involving the Boeing Max, crashed killing 157 people. The Ethiopian Airlines tragedy was the second crash in months involving the Boeing 737.

In October of 2018, 189 people were killed in a crash in Indonesia involving the Boeing 737.  Boeing refused to ground the planes prior to the demand by the FAA.  It is unclear whether companies refuse to repair or ground planes based on lack of proof or just plain fear of the loss of revenue in grounding the planes. Whatever the case may be, if the airline had knowledge of a problem and failed to fix it or, if they failed to investigate a potential claim, they could be liable.

Common In-flight Accidents Due to Negligence

Not all injuries are caused by catastrophic events or plane crashes.  Some injuries are caused by in-flight accidents such as falling luggage, turbulence, slip and falls, food cart injuries and even being thrown from an airline seat. If you were injured as a result of the negligent acts of the airline, you could be entitled to recovery.

Airline employees owe a duty of care to passengers. If a pilot, crew member, flight attendant, or maintenance worker was negligent in their care of the passengers, this may be grounds for a lawsuit.  Courts look to the facts to ascertain if an employee acted as a reasonable employee should. Beyond that, airlines are subject to the “Common carrier” standard which imposes a heightened duty of care. Essentially, the airline and its employees must act in a manner consistent with protecting its passengers.

It is important to note that not all injuries are a result of the airline’s negligence and some may be caused by an agent or employee of the FAA. The Federal Aviation Agency (FAA) is responsible for the safety of the aircraft via inspections and air traffic control.  If your injuries were a result of the FAA failing to act or demonstrating negligence, then it could be responsible.

If you have been injured as a result of an aircraft accident, the specific parties who may be held liable and the process for obtaining compensation varies based on the case. Private carriers and governmental agencies (FAA) may be sued for their negligent actions.

However, there are different rules, notice requirements, and the statute of limitations concerning both types of entities that must be adhered to.  If you have questions about an injury or death involving an airplane, contact our firm today to discuss your potential claim. The Law Offices of Michael P. Burakoff for a personal and initial consultation 973-455-1567 or visit our website.

My family and I have had the good fortune of having been represented by Mr. Burakoff regarding auto accidents in which we sustained serious personal injuries. Mr. Burakoff personally handled our claims and we were extremely happy with the resolution of those claims. He is down to earth and explained the entire process in detail. We highly recommend him to anyone who needs a personal injury attorney!

Michael Burakoff was so compassionate and professional. His staff was so helpful and always available. I would recommend this firm for all your legal needs.